‘Therapy is indeed the new opium of the people, as Frank Furedi makes clear in this fascinating, readable – and disturbing – book.’ – Virginia Ironside, The. Furedi has written a textbook-style assessment of this new therapy culture. While he lacks the illuminating gifts of sociologists such as. The official website of Frank Furedi, author of Therapy Culture, Paranoid Parenting, Culture of Fear. 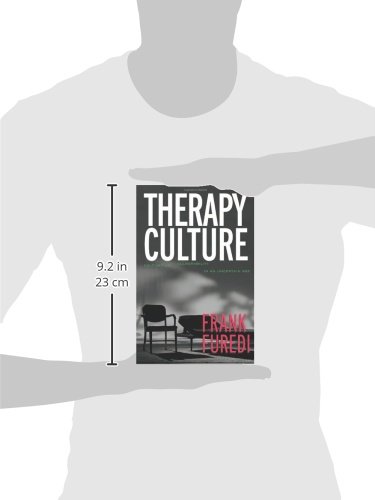 Frank Furedi, professor of sociology at the University of Kent, has become something of a cult figure. His last three books have pursued a broadly similar thesis about the enfeeblement of modern society. Culture of Fear attacks our obsession with safety how pathetic of us never to take risks ; Courting Mistrust criticises the growing recourse to litigation how pathetic to blame others for our accidents ; and Paranoid Parenting culturre with the mollycoddling of children how pathetic not to let kids learn from their mistakes.

Now comes Therapy Culture, in which the thesis is taken a step further how pathetic to share our problems with others. Furedi presents himself as a bold iconoclast, but he has many followers. When his book came out last month, a whole weekend of seminars was organised around its themes. Furedi portrays a world gone therapy-mad. Experiences that would once have been thought normal – disappointment, isolation, tiredness, depression – are being redefined as syndromes requiring medical intervention.

In the US, where counsellors now outnumber librarians, fire-fighters, postmen and dentists, a stress clinic has been set up for third-grade Brownies.

Get off that couch

In Britain, footballers confess their addiction to drugs and drink. On reality TV the intimate banalities of family life are fured for public entertainment. Fureid this emphasis on the private self has, paradoxically, eroded private life – and emptied the public realm of purpose and meaning. Furedi describes some of the reasons for this cultural shift.

The weakening of traditional authority; the decline of religion; the demise of communal spirit; the death of ideology; and, above all, the atomisation of the family. Once there were wise elders to advise those in trouble – now we appoint life-style gurus, personal trainers and “a whole army of counsellors”. In short, therapy has become the opiate of the people. And that, Furedi claims, is what’s furedl sinister.

Therapy, to him, is a sleeping potion used to control the masses, encouraging them to see their grievances as personal problems rather than as justified anger against the state. Therapy is a sedative cynically administered to stifle dissidence and unrest.

It’s anti-science and anti-reason. And it fosters the “normalisation of illness”, driving people in on themselves and blinding them to the socio-economic realities of the day. What’s missing is any concession that therapy might be helpful and motivating; that it can enable those with a sense of victimhood tehrapy move beyond it; that when it works vulture makes people nicer and happier, or at any rate less nasty and miserable.

His objection to the cult of the “vulnerable self”, like Margaret Thatcher’s to the welfare state, is that it encourages dependency. But it might equally be said to encourage independence. As the old hierarchies have collapsed, so people have become more demanding – and in their drive towards self-improvement look to therapy for relief. In fact, it’s the Furedi world-view – centred on an era of silent fortitude – that seems acquiescent.

He is nostalgic for the stoicism of the Blitz or the Aberfan disaster, when the children who survived went straight back to thrrapy, to “take their minds off” therpy.

The era of the stiff upper lip, when the aim was to put others first.

When women’s magazines counselled readers not to express their emotions but control them. When the family unit was a site of respect rather than suspicion. When heroes weren’t dragged through the dirt and “literally tried” sic by biographers.

And when alcoholism was regarded as moral weakness, not a disease. Though terrier-like in pursuit of evidence to support his case, Furedi has no interest in clinical practice and has nothing to theray about therapists themselves.

His is a cartoon world of “therapeutic activists” greedily demanding more resources xulture their projects; of clients being placed in a state of permanent “recovery” rather than being cured; of craven obeisance to the god of “self-esteem” self-esteem promotes the idea that we all need encouragement and praise – to him a very bad idea, since apparently we don’t. If he had talked to the counsellors at his own university, Furedi might have discovered that the problems students bring along are real enough.

And if he had talked to workers in the prison service he might have grasped that “forcing” sex offenders to have counselling before they can be released isn’t just some wimpy liberal tjerapy but a sound principle, based on the knowledge that an offender who refuses to tnerapy his crime is far more likely to reoffend.

But its tough-guy assault on vulnerability leads Furedi into some dark waters. He complains about the public reaction to September 11, for instance, suggesting we needn’t have been so traumatised by the footage of the twin towers.

He describes domestic violence, child abuse, date rape, road rage, stalking and bullying as “recently constructed crimes”, as if that somehow makes them less real. And he suggests that the harmful consequences of sex abuse have been greatly exaggerated, on the grounds that children are “resilient”.

But there’s nothing especially despicable fureri engaging others in our woes. The Furedi alternative, theapy its quietist machismo “Pull yourself together, man”is far bleaker.